MASKS and Other Spectral Presences: Prints by Nathan Oliveira, 1952 – 1972 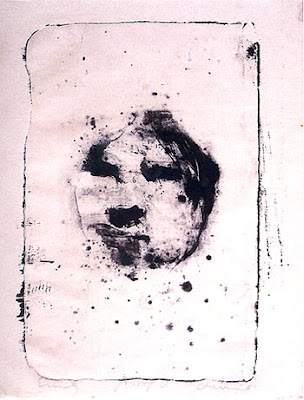 “I don't believe in ghosts but they have been chasing me my whole life.”
- Edgar Allan Poe

That is what I am thinking as I sit down in the living room of Nathan Oliveira on a sunny Friday in November, 2007. Nathan has lived in this home on the outskirts of Stanford University for more than forty years, and I bring with me the warm memories of visiting him here thirty years ago when I was an art student. Time vanishes for me as I glance into the long dining room filled with tribal masks and totems. Wasn’t it just yesterday that I was twenty years old, sitting at the long, rough-hewn dining table, having coffee with Nate and his wife Mona?

The house is still filled with Mona's presence almost a year after her death at age 77 from cancer. An exceptionally generous person, she shared her home and her husband with scores of students, artists, collectors and friends, anchoring a very vital household for a very long time. "She made this." Nathan tells me, taking in the serenity and beauty of the home and its precious objects as he speaks. The truth is that he and Mona made it together, and Oliveira's accomplishments as an artist are deeply intertwined with his roles as a husband, father and teacher.

Oliveira's son Joe has stepped in to keep the home and studio running, and when Nathan invites me into the long studio adjoining the south side of his home I can see that Joe is keeping his father's art supplies well stocked. There is a runway of clean paper under a large “Windhover” painting in progress on the south wall. Opposite the painting are two comfortable chairs into which my former professor and I settle ourselves, joined by a guardian Rottweiler named Rocco, to take it all in.

Now, after devoting himself to Mona while she endured major surgery and painful decline, Oliveira has been spending more time in the studio, slowly getting back to the work of being an artist. With the sensation of loss so present, it makes sense that his most recent works, a series of masks sculpted in wax and bronze, have a funereal quality. Looking over one of these works in Nathan’s studio, I also can’t help thinking that throughout Oliveira’s long career as a painter, printmaker and sculptor, masks and mask-like faces have been constantly appearing in, and haunting his work.

The artist has but one idea. He is born with it and spends a lifetime developing it and making it breathe.” - Henri Matisse


When he demonstrated the making of monotypes to my printmaking class in 1977, I remember Nathan stating that one of his artistic goals was to make things “come alive.” Looking back over his immense output as a printmaker, it is clear that from the very beginning he has had an uncanny ability not only to suggest life in his images, but to go beyond that and depict an enveloping consciousness of life. Whether working in etching, lithography or monotype, Oliveira has found striking ways to depict human presence, and to do so in a way that defies the particularities of time, history, style and resemblance.


Oliveira’s tendency to create mask-like faces is a kind of paradox, since his artistic intention is to reveal, not to cover up. In essence, Oliveira has a long-standing tendency to work like a portrait artist, but in reverse. By starting with a model, or even better a memory, he strips away the particulars that help us distinguish an individual. This gets him closer to an inner truth, rarely a psychological one, but often a spiritual one. Oliveira seems to agree with Picasso, who famously covered two women’s faces with African masks in his 1906 “Demoiselles” that the tradition of representational portraiture in Western art had somehow killed off something quite vital to the heart of art.


Studying with the German Expressionist master Max Beckmann in 1950 must have helped to give Oliveira confidence in his quest to paint inner revelations. In the works of Beckmann, a moralist, carnival masks often function to remind us that his characters have something to hide.

In Oliveira's work the idea of a mask is much trickier. Sometimes when the eyes of his figures turn dark and empty, the mask-like face that remains is something like a trace or a memory. It is as if someone we are trying to remember – or even several people – flicker in our brains and briefly haunt us. One of Oliveira’s talents is his ability to take something fleetingly beautiful and give it staying power.

In the lithographs he executed in the early 1950’s, including an early portrait of his wife printed in 1952, Oliveira used resemblance as only a starting point. The finished print depicts the artist’s wife with a kind of Romanesque solemnity, the contours of her features emerging as if carved from a network of spatters and striations. In transforming his wife into a kind of archetypal figure, the artist’s interest in the universal, as well as his disinterest in the particulars of resemblance, are already apparent. Although early, this work bears Oliveira’s distinctive stamp.

As Jo Ann Moser, referring to a similar early lithograph, points out in her 2002 essay:


“The dramatic, large, white, mask-like face emerging from a dark background became a favorite motif in his (Oliveira’s) later lithographs."

“Emily”, a lithograph from a decade later, contains a free-floating mask that seems to have been removed from a more complete figure. Ambiguous in terms of style and setting, “Emily” evokes archaeology: maybe this face was pried off the marble figure of an enthroned goddess thousands of years ago?

The idea of a floating mask, and all of the spiritual connotations it can suggest, comes to fruition in the amazing series of lithographs, completed in 1963, that Oliveira dedicated to the 19th century French artist Eugene Carrière. Although the first print in this series “Homage to Carrière” uses the face of Carrière as a starting point, resemblance once again is swept away during the artist’s attempt to move his work towards a spiritual consciousness. As Moser describes it:

…the face is generalized and flattened, like a death mask that represents a spirit rather than a specific person.”

The specter of Carrière goes through an astonishing transformation in the second state of the print, executed on a zinc plate. The mask turns black – it floats like a screen of ash -- and the dark voids of the eyes present in the first print are reversed to become empty and white. This state, which Oliveira titled “Black Christ,” puts the viewer in a remarkable situation, seemingly standing behind the dark mask of Christ and seeing through it towards a blinding vision of light. 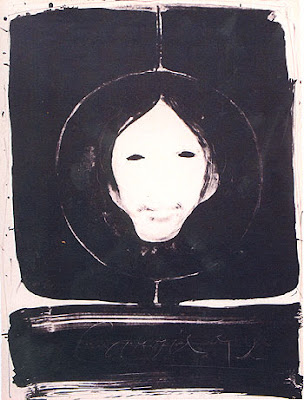 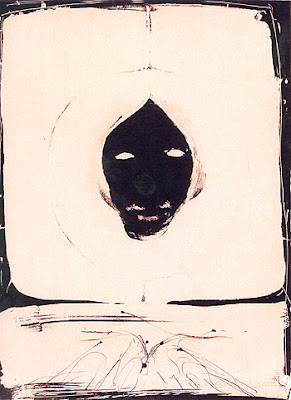 Black Christ II, 1963, lithograph
The “Black Christ” and “Black Christ II” set on a deep maroon field take us not only into the world of the eternal, but suggest that all the presences involved – Carrière, Oliveira, Christ and the viewer – are deeply and permanently co-mingled. In four states of one image, Oliveira has demolished any literal interpretations we may have had, and used the visual to take us into the metaphysical.


While the impact of Oliveira’s prints is often established by process and transformation, as in the Carrière series, his single works can also possess startling graphic energy. The “Spanish Woman” of 1964 presents a dark woman whose features are suggested by a hovering nest of black lines. Yes, the woman is there, but her presence is so insistently graphic that we have to think of the artist and the nervous tension he must have concentrated to conjure her up. She is a beauty that Giacometti and Picasso would have fought over, had they imagined her. 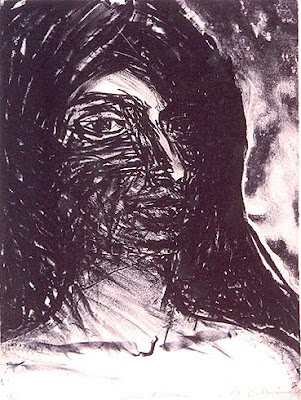 The chiaroscuro “Head of a Young Man” from 1966 has been seemingly scoured white from a black background. The bridge of his nose and his eye socket are banded by a dark oval that could be called a mask if just a hint of the man’s eyelid were not etched out of darkness. Little is revealed about this male presence except in abstract terms, but he tempts the imagination. The dark tension of the image recalls Spanish Baroque painting, but we don’t know if he is a saint, a criminal, or even the artist’s own self-recollection.

In 1970, in his first show at the Galerie Smith-Andersen, Oliveira showed a series of glass-plate monotypes: floating masks printed on delicate Japanese rice paper. The facial contours of these phantasms emerge from bands of primary colors that float surrealistically over vestigial horizons. Almost magically, fragments of recognizable features appear, coaxed out of pigment by the artist’s fingertips. Rarely has an artist created images of consciousness out of such fragile and direct methods.

The shamanic men and women who populate Oliveira’s lithographs of the early 1970’s demonstrate that the artist was finally ready to infuse his art with greater particularity, but not too much. Interestingly, the most prominent forms appear to be willfully invented, suggesting again that Oliveira was relying more on a spontaneous way of creating forms than on any renewed interest in observation. In “Woman, State III” of 1971 a graceful crook-shaped line hangs like a shroud over the reticent features of a dark woman. Her world, the print seems to say, is beautiful but a bit beyond our understanding. She is part of something, but it may not be of this world.
“The world is divided into two types of people: those who divide the world into two types of people and those who don’t.”- Lewis Spitz

After visiting in the studio for an hour, Nathan took me to his office, thickly lined with art books and catalogs. We glanced at a slide of an Etruscan funeral mask that he had chosen for a recent artist talk, and then Googled up some images of King Tut’s newly restored mummy and black, gnarled feet. There was more to talk about but I could see that he was ready to get back to painting. Nathan is unique in so many ways – for starters, he is the only Knight of Portugal I know – but what really strikes me most about him is the utter consistency and generosity of his spirit.

When I came to Stanford in 1975 I heard the whispers about the “country club” school I was attending, and was ready to find snobbery and elitism surrounding me. Instead, I wandered into Nathan Oliveira’s printmaking class and entered the world of an artist who avoids hierarchies, doctrines and differences. By devoting his life and art to the idea that human beings have much more in common – over time, and across all invented boundaries – than most of us would imagine possible, he has created a striking world of human presences. They want to tell us something about ourselves, and about the human connection we share. His art seems to say “look hard and differences fall away.”

Driving away from his home I glance over at the Stanford hills where he and Mona loved to walk. In my rear view mirror the outline of a hawk briefly rises up, and then careens out of view. Nathan Oliveira, I think to myself, has spent his lifetime making something quite beautiful. It is a beauty that appears unexpectedly, and then hovers in our imaginations.

Written as a catalog essay for Smith-Anderson Galerie, 2008