Nathan Oliveira: A Mentor and a Friend 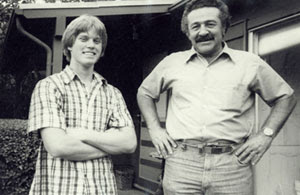 When I walked into Nate Oliveira’s Monoprint class in my sophomore year, I had no idea I was walking straight into my future. Unlike so many of my friends, my major was “undecided.” To put it kindly, I was intellectually immature and lacked direction. Professor Oliveira was about to change that.

Teaching, at its best, is about transforming the way students think, and Oliveira changed my thinking forever by introducing me to a process-oriented way of problem solving. Monoprint is a printmaking method in which a quick painting is brushed, smudged and wiped onto a zinc plate, then pressed onto wet paper with an etching press. Although each image is unique, a faint “ghost” image remains after each impression. Oliveira encouraged us to treat each such image as the starting point for another print.

When he gave a slide show of his Tauromaquia monoprints, a seemingly endless series of themes and variations inspired by Goya, my jaw was dropped the whole time. Oliveira’s way of thinking was so stunningly flexible and inventive. A door was opening for me.

By the end of the semester, monoprint had become an obsession. When I wasn’t busy covering zinc plates with oily black etching ink, I was waiting on the bench in front of Oliveira’s office, ready to show him my latest work and bombard him with questions. As I explored the monoprint process, I could feel my curiosity growing, and I found myself improving as a student in all areas.

Nathan not only patiently answered my questions, he became a true mentor and friend. When my parents visited Stanford, he reassured them that I might indeed have a future as an art major. He invited me to his home, where he and Mona treated me as a guest and showed off the wondrous things they had collected. Sensing that I needed exposure to a larger range of artistic influences, not to mention some pocket money, Nathan prevailed on local modern art collector Hunk Anderson to hire me as an intern.

By junior year, I was spending Saturday mornings at Oliveira’s studio in an old theatre on Hamilton Avenue. As a paid assistant, I would stretch 6 and 7 foot wide canvases and watch the progress of Oliveira’s oil paintings. I remember him laughing to find the imprints of my sneakers on the backs of the canvases I had stretched. When work was over, there might be milkshakes at the Peninsula Creamery.

That same year Nathan contacted his friend, the painter Richard Diebenkorn, and arranged for me to meet him in Southern California during Christmas break. When I look back at the connections and opportunities that came my way through Oliveira, I am humbled. He remained an encouraging presence even when I was not taking his courses. Hanging in my office today is a scrap of paper towel I once found on my easel after wrestling with an awkward painting for Frank Lobdell’s class. Brushed in dark viridian green oil paint, the message was simple: 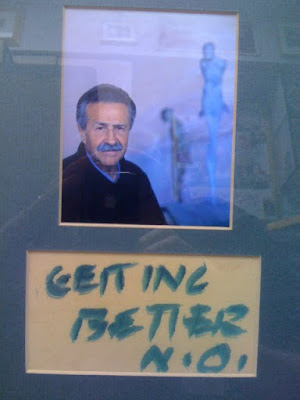 The paper towel note from Nathan now hangs in my office
It is a reminder of the importance of encouraging words.