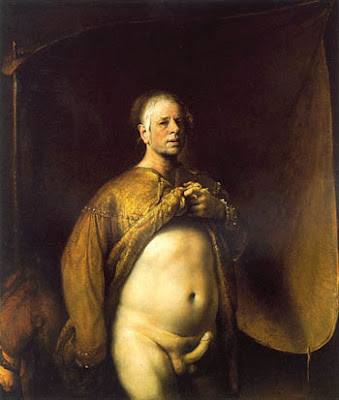 As I left the Forum Gallery in Los Angeles after viewing the exhibition "Odd Nerdrum: Current Work," I took about two steps down Beverly Boulevard before I stepped on a steaming fresh dog turd. While I scraped my shoe on the curb, I had to laugh, since shit seemed to be a theme for the afternoon. Just ten minutes before I had been contemplating a sprawling 76 1/2" by 106 1/2" canvas by the Norwegian painter Odd Nerdrum, titled "Shit Rock."

In this dimly lit canvas, three nude female figures squat in a group, their posteriors facing the viewer. Each woman extrudes a broad, healthy turd into the brooding Icelandic world which Nerdrum's visions typically inhabit. This world, which the painter claims is set in the future, seems to be a place where whatever Freud claimed, at the opening of the twentieth century, was repressed or hidden in Western culture, is reclaimed by Nerdrum as a vitalistic principle. 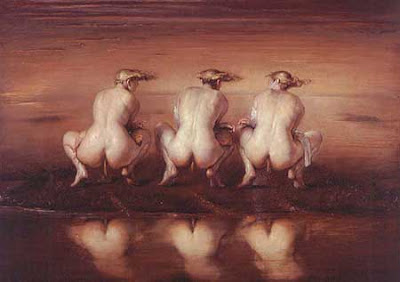 Erections, pissing, shitting, fighting, are common Nerdrum subjects, while sexual acts are not. Although many might find some of his works obscene, the artist seems to avoid portrayal of sexual acts since that is the realm of common pornography, and his work avoids any imagery that might have a mundane popular appeal. The shameless display of ids and egos appeal to the artist as more truly provocative and passionate.

In Freud's lifetime there were bordellos in Vienna where clients could pay to see women defecate into glass bowls. In Nerdrum's vision, the coprophiliac, the necrophiliac, the scatological and the phallic are all disclosed in public. Nerdrum creates a heterosexual world where civilization and technology have wilted as a natural result of their evils against nature, and the tribal society of Nordic peoples that remains, many of them twins or clones, no longer need to keep their bodies, their desires, or their biological predispositions hidden.

Fetishism no longer exists, and has been replaced by Post-Pagan rituals which retain traces of Christianity. Civilization, Nerdrum seems to say, is a set of taboos which can fall away and reveal our authentic passions and spirituality. In the setting of a gallery, a group of Nerdrum paintings also seems to serve as a litmus test which can determine who does or does not belong in the world of the cultural elite. If you like the work, you must belong. 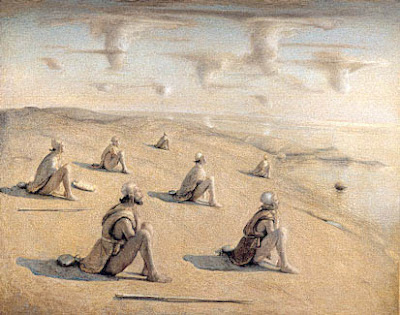 While I was looking at the show, a gallery representative was having an animated conversation with a young potential client. The client, who was not ready for a "major" work -- "Shit Rock" is priced at $265,000.00 -- was contemplating a smaller work perhaps under $100,000.00. When offered a Nerdrum that portrayed a mother and child, he responded that if he would were to buy something, it would need to be more "difficult."

I would assume that many clients for Nerdrum's Los Angeles will come from the world of entertainment, especially television. After all, for people who go through tremendous struggles to create images that will be popular across a broad demographic, within acceptable cultural standards, Nerdrum's difficult images must be a welcome relief. The violence in "The Sopranos" is graphic and edgy, but we will not be seeing shitting women on any network soon.

As a cultural emblem, having a Nerdrum in your living room is a way of saying to your friends "I may live in a four million dollar house with a security system, but there is nothing I can't handle."

Another sense of relief that Nerdrum can offer to Hollywood's wealthy comes from the types of bodies he displays. Every Nerdrum figure, from the babies swaddled in hides to the tribal elders appear unmodified, except by weather and nature. Nerdrum's Arctic world is thousands of miles from the beaches of "Baywatch."

A major strength of the artist's work is his virtuoso technique. Nerdrum grinds and mixes his own oil colors, and has a Rembrandtian range of textures, glazes and effects. In one of his skies, the lower edge of oil-laden brushstrokes, when dried, becomes the suggestion of relief that forms the shadow for the bottom of a cloud. In the faces of his figures, eyes water, lips crack and drool, and skin reflects the Northern light. On the strength of his technique alone, Nerdrum has joined a small group of living painters who seem to have the alchemy of turning paint into flesh: Lucien Freud would be one of the few working at this level. Few young artists seem to have the training to have a painterly dialogue with Nerdrum at his level. 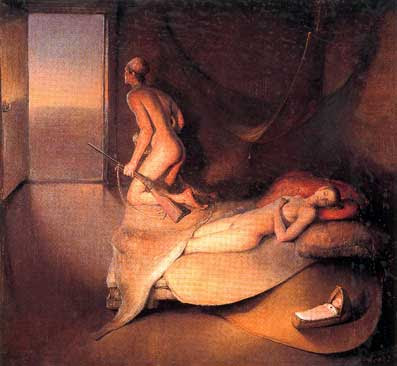 When Goya retired to Bordeaux, he created his most "difficult" works, including an image of Chronos (time) devouring his own child. Goya had lived through revolution, illness and war, and his dark vision was personal and deeply embedded. In contrast, Nerdrum himself, and his clients live in societies where their wealth, access to modern medicine, and the protection provided by modern defense give them an easy real world exit from the painter's spare, imagined world. Whether the purchasers of Odd Nerdrum's paintings will really be able to live with the punishing gap between their own protected lives, and that of Nerdrum's Post-Modern Vikings remains to be seen.

Imagine if the owner of a Nerdrum could invite peasants from any third world nation into his home -- I suspect male collectors will dominate the Nerdrum market -- and let them see what he had collected. How would he explain that he had spent hundreds of thousands of dollars on a painting that depicting women shitting on a rock, or a man with a rifle leaving bed to protect his family on an ominous summer night?

Wouldn't these things just be too familiar if you lived in the Sudan, or in Mexico? Or in Afghanistan?