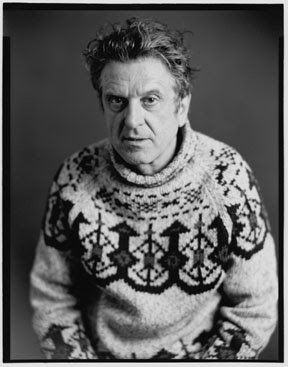 "I am a Chinese of another Empire"

In the recently released comedy “Meet the Fockers” veteran actor Robert De Niro plays a super-uptight retired CIA agent named Jack Byrnes. It is De Niro’s second spin playing this absurdly stern father-in-law-to-be, a role that originated in the hilarious “Meet the Parents”. De Niro is also the co-producer of the film, which has already hit box office gold, perhaps because it makes light of some of the tensions and divisions in Red(Byrnes)/Blue(Focker) America. Like "Meet the Parents" the film also makes the point that there is nothing weirder -- or more touching -- than families and their inner workings.

In “Fockers” De Niro’s character endures a visit to the Florida home of the embarrassingly sexual and spontaneous Mr. And Mrs. Focker played with gusto by Dustin Hoffman and Barbra Streisand. The Fockers adore their underachieving male nurse son, and can’t understand why anyone would hunt, feel uncomfortable discussing sex, or dislike the bold colors of their shambling Florida manse. Vaguely reminiscent of Morticia and Gomez Addams, but dressed in bright, Fauvist prints, Mr. and Mrs. Focker simply have more fun – and more sex -- than anyone else in the movie. By the end of the film viewers should want to go home, nibble their spouse’s earlobe, and peel the Bush/Cheney sticker off their Hummer.

For De Niro, whose career has been built on portrayals of mobsters and psychopaths, it must be a lark to let his dark side downsize into the character of a comically anxious right-wing father. His performance is a convincing catalog of tics and uncomfortable body language that assure the audience that he simply can’t stand the Fockers or the sensuous disorder of their home with its nude wall reliefs and New Guinea fertility figures. Either Dustin Hoffman truly makes De Niro uncomfortable or he is a terrific comic actor, or perhaps both.

Of course, like any actor, De Niro has his own life to draw from and as America will learn in 2005, it is a “Focker” background to say the least. It turns out that the actor we know best as a psycho cab driver and the young Vito Corleone grew up with an artist Dad who lived on West Broadway with a portrait of Baudelaire and a parrot named Demetrius.

Both de Niro’s parents, Robert Sr. and Virginia Admiral, were painters and students of the legendary Hans Hofmann. They painted together in an airy Greenwich Village loft and entertained their bohemian friends including the writers Anais Nin, Henry Miller and Tennesee Williams. They separated then divorced two years after their son’s birth in 1943, when Robert Sr. acknowledged his homosexuality. Robert Jr. was raised mainly by his mother who supported herself by doing typing, and later by opening a typesetting and printing business.

While his ex-wife demonstrated her practicality and supported her son, Robert Sr. moved to what his son later called the "dank and dreary" part of New York to pursue his art and the counter-cultural lifestyle that went with it.

Whatever the complexities of their family situation, Robert Sr. was devoted to his shy, sensitive son who often took a hamster to school in his pocket. They went to movies together, and afterward the son entertained the father by imitating the leading actors of the day, including John Wayne. Young de Niro, who would break out his shyness by developing into a neighborhood tough nicknamed “Bobby Milk” taking cues from what he saw on the screen.

When the teenage De Niro took up smoking, his father, then working as a guard at the Guggenheim Museum, bought him packs of cigarettes on the way home, hoping that the glut of tobacco would make him quit. The father and son began to quarrel as De Niro Jr. hung out with questionable friends, and by the late 50’s De Niro Sr. felt estranged enough to leave for France and pursue the life of an artiste. When he found himself depressed and destitute a few years later, it was his eighteen-year-old son, now a budding actor, who flew to Paris to bail him out and bring him home.

Through the years, Bob Sr. built his meandering life itself into a kind of work of art. In the late 40's he meditated with Paramahansa Yogananda, the charismatic Indian founder of the "Self-Realization" movement in the Pacific Palisades. In the 50's he painted at the famous artist's retreat Yaddo where an onlooker once asked him "How can you paint, weighed down by all that jewelry?" In 1960 the uranium magnate Joseph Hirschorn purchased a group of 50 De Niro works, and the artist used the money to spend three more years in France where he sipped wine at "Deux Magots" and painted in Montmartre. In the late 1970's he lived in the Bernal Heights area of San Francisco -- it reminded him of Montmartre -- and spent time in San Francisco helping Jack Kerousac’s widow Stella extricate her daughter from the cult of Reverend Sun Yung Moon.

As his poems indicate, he was self-consciously building himself a rootless life of Bohemian splendor:

I've searched a Dynasty in vain

I am a Chinese of another Empire

My splendor is let out for hire...

Although he periodically had shows in New York, fame as an artist was eluding him. The art world in the 60's was dominated by Pop art, and then came the vogue for minimalism. De Niro Sr. may have been flaky in some ways, but he was ethical and focused when it came to his art, and it developed steadily through the years regardless of the trends surrounding it.

De Niro’s art remained true to its roots in French Fauvism, and his signature style hints at both the artist’s and his love French modern art of its themes of luxury, calm and voluptousness.

Characterized by Matissean color and loose, Zen brushwork, De Niro’s best paintings are intensely sweet and sensual. When he painted he kept in mind the painter Ingres’ statement that “You can catch more files with honey than with vinegar.” An increasingly strong draftsman, De Niro was, in fact, an artist who in fact worked very hard to make his art seem easy.

As a review of one of his drawing shows stated:

“He (De Niro) seems offhand but is, in fact, a thoughtful, intense draftsman who has developed a very personal fauvism that encompasses linear and solid form as well as decorative pattern.”

When De Niro became a household name in the 1970’s it was because of Robert Jr’s gritty and hyper-realistic performances in movies such as “Taxi Driver” and “The Godfather.” which brought threats to the actor and his family. The fame of his son was a source of pride and annoyance to Robert Sr. who still had a very minor reputation as an artist even though he had shown at Peggy Guggenheim’s Gallery with Jackson Pollock in the forties. The art of Robert De Niro Sr. remained practically invisible, while the name “Robert De Niro Jr.” became internationally famous.

In 1976 the artist/poet published a small red book of poems, titled “A Fashionable Watering Place.” It opens with a note that “These poems are by Robert De Niro, the painter, not to be confused with Robert De Niro, the actor, his son.” The last poem in the book, titled “42ND STREET MOVIE” hints at the strangeness of his life, and of what it felt to be upstaged – and rescued -- by his son.

This isn’t the poem I started to write,
Nor even the same movie.

Throughout the years, father and son remained close, but De Niro Sr., who liked one-on-one contact with people and avoided large groups, stayed out of the limelight surrounding his son. He remained, in the words of dealer Larry Salander, "... more interested in the act of painting than in the business of painting."

Since his death of cancer in 1993, Robert Jr. and his mother have worked to bring his father's art the broader recognition it never received during his lifetime. Had de Niro Sr. still been around, he would have probably held them back: he had always wanted to be known on his own terms. Even the title of one of his poems -- "I DON'T WANT TO REINCARNATE ANYMORE" -- hints that he wouldn't like the idea of a retrospective.

At the recent opening of his father's work in Rome, Robert De Niro Jr. stated that although didn’t pay too much attention to art as a boy, he had adored his father. It turns out that "Jack Byrnes" is truly a role created by an actor playing against character. De Niro Jr, who told Vogue when discussing his late father "I also have his temper, his eccentricity, his passion..." is a chip off the old Bohemian block. The actor has even kept his father's studio untouched since his death, leaving it as a place to reflect on his father's life and legacy.

In 1995 De Niro Jr. helped organize an exhibition at New York's Salander-O’Reilly Gallery, and more shows in New York and California followed. There have been recent shows in Madrid and Rome. Diners at two restaurants in which De Niro is an investor -- The Tribeca Grill in New York and Rubicon in San Francisco -- can see De Niro Senior's oils and watercolors on the dining room walls.

On January 12, 2005 Salander-O'Reilly will open a major exhibition, to be accompanied by a $125.00 catalogue and biography of the artist. Although De Niro Sr. is gaining in reputation, as are many figurative artists of the post WW II era, it is doubtful that many critics will see him as a leading artist, but rather an artist of charm and artistic integrity.

Of course, in the end, the only critic who matters gives De Niro Sr. a rave review. Robert De Niro Jr. told the San Francisco Chronicle in 1998:

"I loved his work because he was my father, but also being as objective as I can be I think it's great.'' 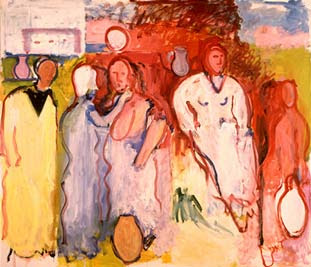 Estate of the artist.