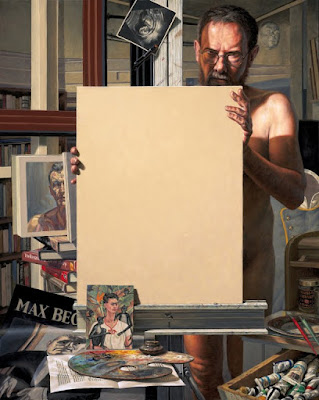 Self-Portrait as a Masterpiece of Creation, 2011
oil on aluminum panel
30 × 24 inches
It must be exhilarating to be F. Scott Hess: he seems to have reached a point where his brush can take him just about anywhere he wants to go. The varied subjects, and hybrid realities of Hess’ recent paintings make them appear eclectic when seen together, but that just scratches the surface. His works actually have a tremendous psychological unity. They have sprung from the mind of an artist who is recycling and blending the richness of his actual life and infusing it with cultural memory and imaginative vigor.

Seriously, to be able to wake up in the morning, sip some coffee and think to yourself “Today, I feel like painting five female ballet students in leotards tossing the bloodless, hulking corpse of the French academic artist Bouguereau out a third floor window in La Rochelle.” Then, if you are Scott, you just head to the studio and make this whim explicit, riveting, credible and even slightly funny. 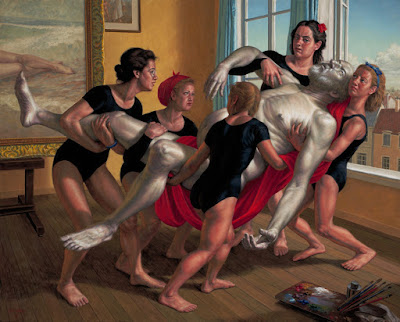 The Death of William Adolphe Bouguereau, 2011
oil on aluminum panel
24 × 36 inches
The painting mentioned above, “The Death of William Adolphe Bouguereau", is, among other things, a sly revenge fantasy. “I don’t care much for the content of Bouguereau’s work,” Hess acknowledges, “but the man can paint soft female flesh better than I ever will.” It is worth pointing out that in talking about a dead artist in the present tense, as if he is still alive, Hess has given us all a clue to the vitality of the forces and images – past, present, real and painted – that he can draw on. Most art historians have already tossed Bouguereau out the metaphorical window decades ago, but Hess clearly enjoyed doing it on his own terms, with humor.

Not only does Hess, project his fantasies onto the canvas with shocking technical aplomb, and a healthy dose of catharsis, he generally manages the complicate things a bit. In the case of “Bouguereau” the blue and white tones of the artist’s corpse play off the red drapery used the carry him to the window, and evoke the red, white and blue of the French flag. “But it was totally subconscious on my part…” says Hess about the apparent coincidence. That may be true, but what a well stocked subconscious Hess has.

In the past year or two Hess has dredged up references – consciously and unconsciously – from the Bible, Velasquez, Persian poetry, Bellini, Watteau, Sigmund Freud, the experiences of child-rearing, and the experience of being a child. Somehow, all of these things have been internalized, even sorted. “I generally just paint what I see when I’m not looking,” Hess comments.

"Art history, popular culture, literature, and the subconscious all simmer together in Scott's skull," observes his friend and fellow artist Peter Zokosky. “Scott's mental salad bar has more choices than anyone's, and he always comes away with something amazing.” The mental salad bar that Zokosky refers to is also well stocked with life experiences and travel.

In the artists own words: “I’ve been caught after sundown on the dangerous Zabol-Zahedan smugglers road where Iran, Pakistan, and Afghanistan meet, eaten a small yellow dog in southern China, and lived in an Anarchist-vegetarian-nudist commune in the Midwest. I’ve had coffee with spies and terrorists, lived over the back fence from the Pope, and witnessed the birth of both of my daughters.” Witnessing and experiencing are themes that Hess often strives to balance in his works. 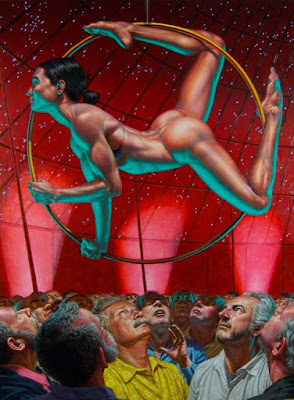 Suzie Q, 2011
oil on aluminum panel
48 × 36 inches
In “Suzie Q,” a 2011 painting, a group of older men avidly stare at a nearly nude woman performing Cirque de Soleil style in a suspended metal hoop. If you stand in front of it for a few minutes you’ll find yourself staring at the woman too, then staring at those who stare. Yes, you are a voyeur. One of the things that Hess does is to let anyone who is strong enough take part in fantasy worlds that he provokes and evokes, and unashamed voyeurism is one of the pleasures he offers. If you aren’t convinced of this, have a look at Scott’s tiny panel painting “Morning Glory” and then get back to me. 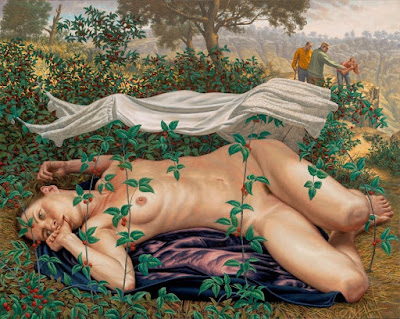 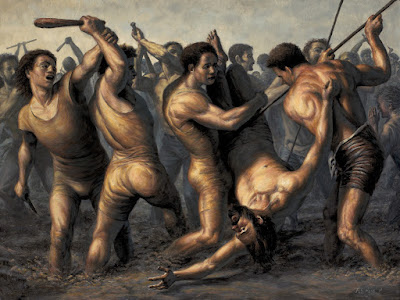 Mud Riot, 2011
oil on aluminum panel
12 × 16 inches
Hess likes subjects that allegorize violence and chaos. To put it another way, he has a dark romantic side. “Mud Riot” seems to borrow from Antonio Pollaiuolo’s 15th century engraving of ten male nudes slaughtering each other with axes, swords and spears, but Hess slyly bogs his battle down in calf-high mud. Even with their ancient weapons they seem familiar: are they our congressmen? 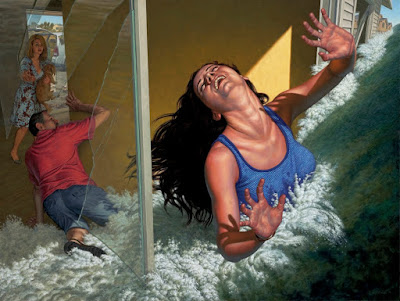 The Wave, 2010
oil on aluminum panel
36 × 48 inches
In “The Wave” water cascades through a window, but the woman it engulfs seems exhilarated. War and disaster, Hess seems to say, are both, among other things, universal human experiences. They are also transitions. They are also both darkly humorous, if you are a connoisseur of the human comedy. One of the things you have to appreciate about Scott Hess is that he doesn’t just study or comment on the human situation. Without hesitation or condescension he will portray himself in the midst of it.

Hess includes himself and one of his daughters in “Oblation,” a painting in which the pouring of water suggests an offering. Scott stands, shielding his eyes from the sunset, acknowledging his place in this particular cycle. Raising a child to adulthood takes a major portion of your life,” he comments, “or drains it out of you.”

In his “Self-Portrait as a Masterpiece of Creation,” Hess plays fair by posing nude himself behind the verso of a blank canvas. Lucien Freud and Frida Kahlo, present in the form of reproductions of their self-portraits, provide additional fuel for the theme of artist’s using the self-portrait as a vehicle for the insecurities of both the artist and the viewer. Hess is interested in Lacanian Gaze, the idea of a painting being a mirror that reflects back the viewer's own thoughts, and elicits the anxious realization that he or she can also be viewed. “In a way,” he says “I think the blank panel represents that, and also a deliberate lack of guidance on my part.” 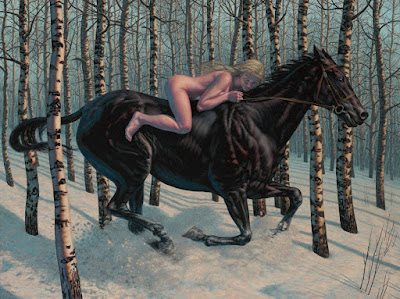 “Dark Horse,” a recent oil that Hess is very fond of, depicts a nude woman clutching the reins of a black stallion charging through a snow covered birch forest. Yes, it has a connection to the tale of Lady Godiva, but it also is an essay on opposing forces: a black horse in a white forest, warm human flesh in frigid weather; motion in a still place. The rider is perhaps being chased, but there is a smile on her lips. Hess used some of Eadweard Muybridge’s classic stop action photos of horses to develop the running steed, and perhaps there is a visual pun in its “frozen” pose. It is a painting of extremes, balanced by poetry.

“I get along easily with everyone,” says Hess, “but always seem to unintentionally insult people during raucous intellectual debates.” It is an honest aside, coming from a man whose art can be both engaging and disturbing. Hess has a talent for conjuring up paintings that are challenging hybrids of the mythical, the historical, the allegorical and the universal. His works are imaginative fiction, each one a journey right to the edge of what might actually be true.