Every Friday morning I teach a community college painting class of about 25 students. The classroom is quite full, and the beginning students paint on folding easels set on heavy formica topped tables, while a handful of advanced painters paint standing up, vying for space near the storage racks in the back of the classroom. The room smells of coffee and linseed oil, and the atmosphere is surprisingly quiet, especially since most students listen to ipods while they work. I move from student to student, commenting, cajoling and demonstrating, trying to see each student as an individual and nudge their skills and ideas forward.

During the course of the 17 week semester my beginning painters grapple with the traditional fundamentals of painting -- shading, color mixing and composing -- and crank out a few hard won still-lives, a landscape or 2, and a self-portrait that may or may not end up resembling the student who created it. By the end of the term I generally have 1 or 2 standouts whose work hints at talent that could take them further. I try to do what good teachers should do, which is to take them aside and offer encouragement.

Inevitably, my best students will drop by my office and ask: "Do you think there is any future for me as an artist?"

Giving a credible, informed response to that question can be difficult, especially if I honestly come from my own experience. I certainly never made it past "emerging artist," and teaching has been my safety net. What I tend to tell my students, including those who seem to have both talent and genuine ambition, is that being able to make a career as an artist is a hoop dream. Paying the bills by selling art is an elusive accomplishment; a dream prize attained only a select few, a haunting mirage for many, many others. That, by the way, is exactly what my professors told me decades ago.

The artists I know who have managed to make art a full-time or nearly full-time career face substantial daily struggles -- personal and financial -- and they are the lucky ones. "Of course, it wasn't really luck that got them there," I politely explain to would-be Picassos; "it was a combination of talent and hard work." Sometimes, when I am saying it, I even believe it.

My students listen respectfully, but I keep in mind that they are the children of media society, and that being 35 years younger than I am they see things differently. They believe that if they really want to get ahead, what they need to do is find a way to become famous. For the generation of students I teach, a "taste" of fame is easy to sample -- a Facebook profile, a wordpress blog and a listing on deviantart.com can provide it -- but they soon learn run headfirst into the paradox that in a world where everyone is special nobody is special. They are interested in some real fame -- even 15 minutes worth -- the kind that sells.

I was sad, but not surprised to read a recent blog by Yalda T. Uhls, "Kids Want Fame More Than Anything," which noted that preteens asked what they wanted in their future wanted fame more than anything else. Of course they want fame: they live in time when materialism and economic uncertainly have collided head-on, a fame seems a magic ingredient that can help pay the bills no matter what. In my studio classes, and in my art history and art appreciation classes, my students are always fascinated by the artists who have become media figures and made a fortune in the process.

Once my students begin to pay attention they realize that many of the artists at the top of the economic heap in today's art world aren't necessarily those who have made substantial aesthetic contributions. The artists they come across in the media are often those who have rigged the system by mastering the art of getting the public's attention and then holding on to it. They are artist/celebrities, and fame is a crucial prop in their pricing structure. Fame is also a shield that deflects and distorts tough critical questions and obscures whatever art may or not be present.

In a sense, these art world figures are like the hedge fund managers and CEOs who have steered rivers of cash into their own pockets while the middle class has waned. They are master manipulators who have outfoxed the rest of us -- particularly those who still talk about the importance of "talent and hard work" -- and have become art world Pharoahs. Those who buy their work certainly include like-minded collectors who have made their money with chilling acumen and aplomb.

So, last week, when a painting student dropped by my office with a newspaper clipping of one of Damien's Hirst's spot paintings I hit a patch of real despair. In an art world where a figure like Hirst can rise to the top who needs painting classes? Maybe our community college needs to trash all the existing curriculum and offer studio courses like "Preserving Sharks in Formaldehyde," or "Getting Others to Do Your Paintings For You." The teaching of actual painting could be outsourced to China and taught via SKYPE. 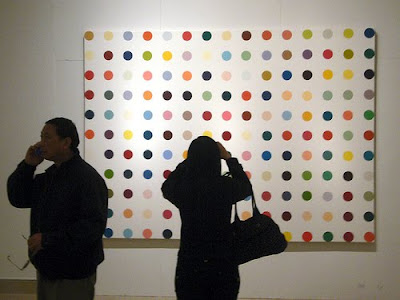 A Hirst "Spot Painting" on view in Beijing, China. Photo by Furdis
The recent international set of exhibitions displaying Damien Hirst's spot paintings has really brought home to me just how potent fame can be as an economic and social force. The spot paintings, which are made by Hirst's 160 employees -- yes, Hirst is creating employment of a sort -- seem to cry out and even insist on the fact that fame is all that an artist needs to sell.

The most generous thing I can say about Hirst is that he is tremendously canny, but his spot paintings require only the thinnest sliver of "art" in their conception and making, and neither Hirst nor any of his employees need to bother with any of the skills that I try to pass on to beginning painting students. To those who feel that Hirst's spot paintings are actual paintings, grounded in actual aesthetic theories and vaguely connected to minimalism, I sadly wave to you and say "Well, maybe..."

Of course fame, and its disreputable cousin notoriety, have always played a huge role in the hierarchies of the art world. The Mona Lisa would certainly be a very famous painting if it were only known for its technical and psychological subtlety, but when its theft from the Louvre made international headlines in 1911, it became infinitely more famous. Marcel Duchamp, who parodied the Mona Lisa by inscribing "LHOOQ" -- which reads phonetically, in French, as "she has a hot ass" -- on a Dada postcard of La Giaconda, pushed her fame even higher.

Duchamp himself, when he created his found object "Fountain" using a factory-made urinal, certainly was betting on the beneficial effects of notoriety. Purists can argue that Duchamp was attempting to shift the focus of art-making from craft towards intellectual interpretation, but it also seems fair that he carefully considered the power of controversy as a means of becoming known. Also, by detaching art making from past necessity of developing hand-skills he made it possible for anyone with an idea to become an artist. What a chess move that was!

Andy Warhol, whose ideas rapidly overtook his hands, built a career by simultaneously absorbing the sociological theories of Marshall McLuhan and by socializing with mass media celebrities until he became one himself. By the end of his career fame was the main ingredient in his art, and from a business standpoint every artist who has come after Warhol has had to consider whether or not he is a "Warholian." After all, the idea of having others make your art for you and becoming rich while they do so has its attractions.

To be fair, what painter hasn't done a bit of scheming to consider how a touch of controversy could boost sales? A great deal of today's representational painting has some kind of "hook" but what critic can really peer inside a painter's mind and discern whether his or her subject matter comes from sincerity or calculation? The painter John Currin, who has been commercially successful and who also has phenomenal skills and technique may have used pornography as his subject matter out of heartfelt aesthetic and personal convictions. Only he knows...

When I come in to teach on Friday mornings I try to put all of this out of my mind and just teach painting. If you also teach, you know what I mean when I say that watching students develop and gain confidence in their own skills is fantastically rewarding. Maybe one of my students will someday end up working for Jeff Koons: after all, the artists who do his paintings for him are very, very good. Or, maybe one of my students will somehow become genuinely famous as an artist. Will he or she do it through hard work and talent? Through sensational cunning? By combining all of those things?

I can teach my students to mix chromas and shade forms, but I can't prepare them for fame. In fact, according to one man who should know, nothing can:

"Fame is empowering. My mistake was that I thought I would instinctively know how to handle it. But there's no manual, no training course."