on March 20, 2012
"Circle of Animals/Zodiac Heads: Gold," a group of sculptures by the Chinese artist/provocateur Ai Weiwei, is now on view in the Strauss Gallery of the Museum of Contemporary Art San Diego's Downtown Jacobs Building. The installation consists of 12 gilded bronze heads -- a rat, an ox, a tiger, a rabbit, a dragon, a snake, a horse, a sheep, a monkey, a rooster, a dog, and a pig -- each a representative symbol from the Chinese zodiac.

The heads, which are between roughly 20 and 30 inches tall, display some striking stylistic discontinuities. The sheep, for example, is credible, almost naturalistic. Another head, the monkey, has a streamlined brow and stylized round eyes. "Is that Curious George?" a child might ask. The snarling antlered dragon is instantly identifiable as the characteristic fantasy animal of ancient China. Their immaculate gilded surfaces raise a question: are these heavily restored antiques or high end reproductions? Installation View: Ai Weiwei, Zodiac Heads/Circle of Animals: Gold, 2010
Gold-plated bronze. Courtesy of a Private Collection. Photo: Pablo Mason.
Assembled in a circle, atop custom-made huali wood pedestals also constructed by the artist, the heads glimmer in the building's lobby, easily visible to passengers arriving on local commuter trains. Seen in a hurry -- in a passing glimpse -- the heads may be hard for the locals to place: "Honey, I saw a golden grinning rat head on a pedestal when I was getting off the train today."

Anyone who slows down to peer through the window longer -- or who enters the museum -- is going to find that the longer they look, the trickier things get. The Zodiac heads are aesthetic banana peels meant to trip up viewers, and send them sliding down the slopes of complex historical, political and personal references. "However absurd his (Ai Weiwei's) works might appear to be," cautions Adrian Searle of the Guardian U.K., "he understands the place of the artist, recognizing that his work exists in a global world of social, cultural and economic relations."

According to Kathryn Kanjo, the MCASD's chief curator, Ai Weiwei the artist is "playful and shrewd, elliptical and poetic." As a political and social activist he has shown the world some of his other qualities: bluntness and tenacity. After his November 2011 release from 81 days in prison, he vowed to fight charges of tax evasion "to the death." An unapologetic critic of China's repressive government, Ai Weiwei recently stated that "The biggest crime of a dictatorship is to eradicate feelings from people."

Ai Weiwei has built his reputation by channeling his own feelings into a diverse range of artistic expressions. While in the U.S. he created conceptual works in the form of readymade objects while also gaining a reputation as a top flight blackjack player. Since his return to China in the mid-1990s he has published a series of art books, created performance pieces, dabbled in architecture and even co-curated a show, "Fuck Off," in 2000.

His large scale works of the past few years have included his 2007 "Template" a monumental outdoor sculpture assembled from Ming and Quing era windows and doors. In 2010 he scattered ten tons of hand-painted porcelain sunflower seeds on the floor of the Tate Modern's Turbine Hall to poetically conjure up issues of Chinese everyday life, hunger, and collective work.

For a 2010 installation in Munich, he had 9,000 children's backpacks arranged to spell "She lived happily for seven years in this world" in Chinese characters. That phrase was a quote from a mother whose child died in the Sichuan earthquake in 2008. Ai Weiwei's piece was intended both as a form of remembrance for thousands of children who died in the quake and whose lives, in the artist's words, "disappeared within the state propaganda." His works, observes Kathryn Kanjo are "a conflation of art and politics."

In the case of the Zodiac heads, the dual strands of art and politics reach back more than 150 years.

In October of 1860, the British diplomat James Bruce, the 8th Earl of Elgin, ordered the complete destruction of the Yuan Ming Yuan (Old Summer Palace) a monumental complex of gardens and palaces northwest of Beijing. The destruction, which was a retaliatory gesture, and the closing scene the Second Opium Wars, involved 3,500 British troops who lit fires that burned for three days. An estimated 300 eunuchs, maids and workers who had been locked behind the palace gates perished in the inferno.

As the fires raged, Lord Elgin and his troops looted considerable treasure, much of which made its way back to Europe. International collecting ran in Elgin's family: it was Bruce's father Thomas, the 7th Earl of Elgin, who famously obtained the permission of an Ottoman sultan to export the ancient marbles of the Greek Parthenon to Britain where they remain to this day.

Charles George Gordon, a 27 year old captain who took part in the razing of the Summer Palace, later lamented; "You can scarcely imagine the beauty and magnificence of the places we burnt. It made one's heart sore to burn them." The sense of cultural loss would linger for generations both in China and in Europe.

When a group of visitors from the Museum of Contemporary Art, San Diego, visited the Beijing studio of the artist Ai Weiwei in November of 2010, they came across a work in progress; a dozen gilded sculptures of animal heads. "They were on the ground, not even on blankets," recalls curator Kathryn Kanjo. "There they were; so ornate, decadent and garish." 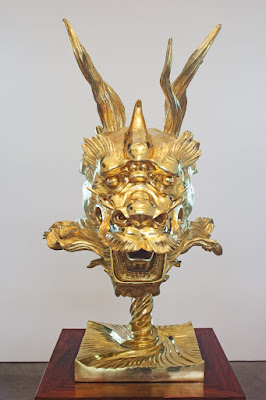 Ai Weiwei, Dragon from Zodiac Heads/Circle of Animals: Gold, 2010
Gold-plated bronze. Courtesy of a Private Collection. Photo: Pablo Mason.
The heads, as the San Diego delegation would learn over time, were Ai Weiwei's attempt to reconstitute a set of Zodiac heads that had once been part of an ornate clock and fountain on the grounds of the destroyed Summer Palace. The original heads had been made by Giuseppe Castiglione (1688-1766), an Italian Jesuit who while living in China had executed commissions for the Chinese emperor in the 18th century.

In other words, Ai Weiwei, a Chinese artist who has been considerably influenced by Western Postmodernism and who lived and studied in New York for over a decade, had recreated works made by a European who had lived and worked in China in the 18th century. What had spurred Ai Weiwei to make another Zodiac?

In 2009, the Chinese government -- Ai Weiwei's nemesis -- had tried to block the sale of two of the original heads, a rabbit and a rat, being offered at auction by Pierre Berge, the partner of the late Yves St Laurent. Berge then infuriated the Chinese government by offering to return the heads to China, where they would join five others that have been brought to Beijing in recent years, if government would apply human rights, and give Tibet its freedom.

Of course the Chinese government refused, and the two heads were auctioned. The winning bidder, Cai Mingchao, a member of China's "Lost Cultural Relics Foundation" bid $19 million dollars: then he refused to pay.

In this brouhaha Ai Weiwei saw an opportunity. Here was a chance to do what he does so well, to make a work of art that would shape a tangle of uncomfortable cultural, moral and aesthetic questions into the physical form of a work of art. By resurrecting the set of Zodiac heads, and reconstituting the missing ones to his own liking he eventually came up with some zingers.

Here is one: Are the works in San Diego "fakes" or "copies?"

A few more: To appreciate the work, is it important or inconsequential to know anything about the Chinese Zodiac? What is the role of ancient cultural symbols in a Postmodern work of art?

Finally: Who "owns" the original, looted Zodiac heads? Does a government in power, whatever its legitimacy, "own" the culture it governs and its artifacts?

These thorny questions have no clear answers. The poetry that results from that uncertainty is an essential ingredient, and also a reminder of Ai Weiwei's quiet, Postmodern despair. His own engagement with political power has given him a lesson in the inherent theatricality of art and culture. "At the end of the day," comments Kathryn Kanjo, attempting to sum up Weiwei's position, "it's all a fake."

"Circle of Animals/Zodiac Heads: Gold" is really a work about the freedom of the imagination, and the persistence of ideas. It was conceived by a courageous man who has put his life and career at risk by asking inconvenient questions. It is worth nothing that Ai Weiwei, who was born on May 18, 1957, was born under the sign of the rooster, an indication of a cautious, skeptical and perceptive mind.

Compelling as the Zodiac heads may look in San Diego, wouldn't Ai Weiwei's second, larger set of Zodiac heads, recently shown at the LA County Museum of Art be very powerful if they were set up in Tianenmen Square? As Ai Weiwei continues to demonstrate, works of art live and die in the context of power and politics.