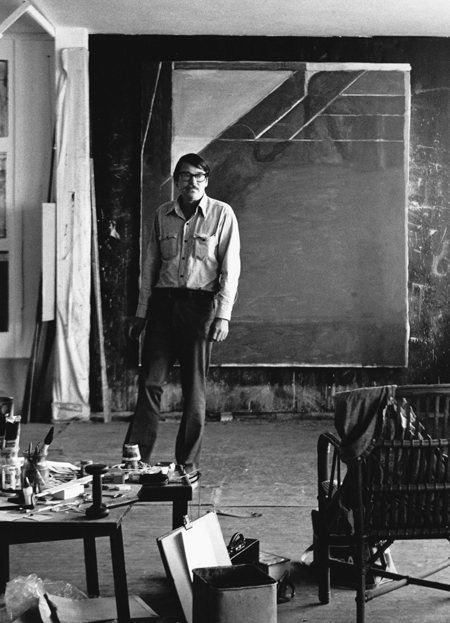 When Richard Diebenkorn, who had been painting representationally for more than a decade, decided to switch back to abstraction in 1967, the changeover represented a dramatic reversal in his artistic direction. The difference between figuration and abstraction, the way he saw it, was enormous; "...it's from one end of the stick, way over here," Diebenkorn told Susan Larsen, "to way over there, as far as I can go." The series of works that would result from this about-face, the Ocean Park series would occupy Diebenkorn for more than two decades, and cement his place in art history. Writing in TIME magazine in 1977, critic Robert Hughes declared the Ocean Parks to be "... among the most beautiful declamations in the language of the brush to have been uttered anywhere in the last twenty years."

When Hughes wrote that tribute, Diebenkorn was only halfway finished with the series, which would ultimately consist of some 145 paintings--from 100 inch high canvases to 6 inch square cigar box lids--as well as 500 works on paper, and numerous monotypes and limited edition prints. The current OCMA exhibition, co-organized by the Orange County Museum of Art and the Museum of Fort Worth, and curated by OCMA curator Sarah Bancroft, is the first exhibition to focus solely on the Ocean Park series in all its variety and richness.

Choosing abstraction--the far end of the stick--meant abandoning the human figure, which Diebenkorn had employed, in aesthetic terms, as a "concentration of psychology" and also a "source of opposition." A man of restless, persistent intelligence, Diebenkorn liked William Butler Yeats' notion that poetry comes out of "the quarrel with ourselves." The human figure, most often female, set in and against painted environments, had been an element he had tussled with beautifully. "The more obstacles, obstructions, problems--if they don't overwhelm--the better," is how he once explained it.

Diebenkorn's career was marked by a series of willful shifts. He had made non-objective paintings while a staff member at the California School of Fine Arts after World War II, but in 1955 he followed the lead of his friend and colleague David Park by moving back towards then-unfashionable representation. "His development from non-objective to figurative painting has seemed sufficiently contrary to the supposed main direction of Modern art to cause surprise," wrote art historian Lorenz Eitner in 1965.

Yet despite his seemingly independent cast of mind, Diebenkorn was always sensitive to what was said about his work. He found it irritating when a show of his representational paintings in New York was criticized as demonstrating that he was actually an "abstract painter" whose figures were "pawns" in an intellectual chess game. According to his friend Nathan Oliveira, Diebenkorn also chafed at the public reaction to a show of his figure drawings held at Stanford University in 1964, that he had created during a year of residency. In the artist's own mind, the numerous drawings of female nudes were informal studies, so he was annoyed when the poses of his figures were subjected to Freudian analysis.

After his appointment to an art professorship at UCLA, Diebenkorn moved into a studio at the corner of Ashland and Main Street in what is now downtown Santa Monica, and made four last representational canvases. "Then," he later recalled, "I abandoned the figure altogether." Still, because of the artist's previous engagement with figures, landscapes and still lives, the Ocean Parkpaintings often seem anchored by hints of recognizable forms and infused with the atmosphere of specific places. As late as 1969, Diebenkorn made a gouache, charcoal and ink painting on paper -- Untitled (View from Studio, Ocean Park) -- that showed the palm tree and rooftops outside his studio, framed semi-abstractly by sensuous scumbled planes.

It is a tempting game to look at a painting like Ocean Park #43, from 1971, and actually locate bits and pieces of Santa Monica's Ocean Park district, where Diebenkorn had established his studio. Taken literally, the upper left side of the canvas might be seen to include a trapezoid of moist morning air set behind a roofline, which in turn hovers over an ochre window. As pleasing as it may be to try and "see" things or locate specific environments in the Ocean Park paintings, doing so goes against Diebenkorn's wishes: "I never tried to work in terms of this coastal light, ambiance, and yet people assume I do. There have been reviews that refer to rather specific things on the beach--hotdog stand or something like that--and I'm just making paintings, and this environment has produced such and such a look and feel."

"Diebenkorn was certainly affected by his environment, the light and colors and atmosphere," writes curator Sarah Bancroft in the catalogue for the OCMA show, "but the Ocean Park works were never abstract landscapes of his surroundings; they were a far more personal synthesis of his own decisions, attitudes and process within a particular microcosm to which he was sensitive."

Over its long span, the Ocean Park series required Diebenkorn to sustain his sense of invention and discovery within a somewhat uniform framework. When the imagery became too consistent, Diebenkorn would get testy with himself. In 1975 he made a series of monotypes during a two-day visit to Stanford University. One of them, dated 4/12/1975, carries the artist's note to himself, brushed in firm capital letters at its lower edge: "TAKE A GOOD LOOK DICK--THIS IS THE BLOODY FORMULA."

The best Ocean Park works have a paradoxical, fleeting sense of beauty; Diebenkorn worked hard to make sure that nothing was too carefully limned or solidified. "I'm not a hard-edge painter," he insisted. Then again, he chided Nathan Oliveira, known for his flowing sense of line; "Have you discovered the straight edge yet Nate?" Using straight lines, added with a slim brush or vine charcoal, Diebenkorn cantilevered, braced and trussed atmospheric fields of paint and pentimento. As a kind of counterpoint, he would let the occasional rough edge or drip spill over his firm geometry; a nod to the irregularity of nature. In Ocean Park #60 from 1973, for instance, a smartly brushed blue diagonal line in the upper right of the canvas is decorated by rivulets of wash that cling to it like tiny stalactites.

At his best, Diebenkorn was a kind of carpenter who built painted structures that somehow enclose and sustain something evanescent. "In their initial impact," wrote Susan Larsen, "the Ocean Park paintings give one a feeling of breathlessness, as if the painter had, with risk, bridged a chasm to take hold of some radiant vision." Like Cezanne, Diebenkorn worked to generate the small sensations of feeling that occur when sight and memory filter through the mind, then the brush, onto the canvas. He was smart enough to recognize and seize the moments of beauty as they appeared, and disciplined enough to make sure he kept himself off balance during the search. He also had a fantastic feeling for local color and knew how to tune and modulate its opacity.

Characteristically, Diebenkorn was ambivalent towards the praise that his work received from others. "I'm not comfortable being, altogether comfortable, being accepted," he once confessed. The Ocean Park works--paintings, works on paper and monotypes--still resonate with his principled discomfort. Before Richard Diebenkorn painted the Ocean Park series, who knew that an artist's willful reversals and private hesitations could add up so magnificently, or so elegantly.