On Museum Labels As Art, Critical Theory as Hot Air, Postmodernism as Over and Bad Cruise Ship Art

In her recent review of The Hammer Museum’s Third Biennial—Made in L.A. 2016: a, the, though, only—critic and curator Victoria Dailey includes images of a number of the exhibition’s labels. Why, you might wonder, are the labels so important? The answer is that several of the installations in the Biennial exist only as labels, and the same is true for at least one “performance.” This is an absurd situation: when labels are the sole manifestation of a work of art, it strikes me that we are witnessing an exercise in Emperor’s New Clothes conceptualism.
Even in situations where actual objects are on view at the Hammer—for example Margaret Honda’s film cases—the labels are charged with playing a crucial role, which is to provide excruciatingly academic explanations and justifications for the items they attempt to support. Here is some of the text that accompanies the film cases:

Margaret Honda’s films grow out of a sculptural practice that privileges a material relationship to the medium above any narrative or representational concerns...By displaying them in such a manner, Honda acknowledges the film’s objecthood, giving as much weight to this quality as to what is projected on-screen.

The entire label follows below—if you care to read it—but just the language above, which has the contextual underpinnings of “critical theory,” attempts to justify the idea that staring at film cases is something that should interest us, maybe as much or even more than the content of films they contain. After all, they have achieved “objecthood.” It’s a telling example of epic dullness shielded by the veneer of an academic text; a blast of hot air inflating a hollow conceit.

If you really care about art, just ask yourself: “Do you really want to visit the Hammer to stare at film cases and read labels?” Is this what you think of as “cutting-edge” art that deserves it’s place in a vanguard exhibition? If you do, let’s have a beer sometime, but I digress.
No doubt, some will accuse me of welcoming the dumbing down of art discourse, but I’m convinced that over time the over-reliance on critical theory and textual analysis has led to the weakening and decline of Postmodern art. When John Baldessari brought suitcases full of European magazines for his CalArts students to read in the early 1970s, it was fresh material that was intellectually challenging. Now, more than four decades later, the “discourse” has become pedantic, and museum labels like these are the evidence of academic stagnation.
Critical theory has ossified into a life support system that all too often pumps up anemic, pretentious and/or nihilistic works of art. As a result—in my view—the range of what our cultural institutions call “Postmodernism” in art has been blown up to the point of absurdity. Everyone is an artist, everything is art and context can justify execrable art. Thanks for that Duchamp and Derida...
I personally think of Postmodernism as being over—even dead— and I actually have a date when I think it formally expired: Friday April 25th, 2013. On that fateful day, artist Paul McCarthy’s giant inflatable poop sculpture was deflated by a sudden downpour in Hong Kong. The metaphor generated by the situation is just too delicious to resist: a confrontational and repellent work of art has it’s vulnerability exposed, revealing itself to simply be a pumped up gasbag. The era of “Anything Goes” vacuous pluralism must have deflated and ended with it, right?

Then again, calling Postmodernism “dead” is a rather irresponsible and potentially unsupportable thing to do. I know I have grown weary of hearing painting called “dead,” and that lofty pronouncement has always been wrong.
When I recently posted a Facebook status with my opinion that Postmodernism is “over,” a flood of intelligent comments and counterpoints appeared in short order. Conor Walton, a representational painter based in Ireland, had this to say:

Conor asks a great question: if Postmodernism is to be declared dead, what will fill the void? The vested academic and commercial interests of the art world demand a new stream of “isms,” to label, categorize and commoditize. If Postmodernism is gone, there is a vacuum to be filled, even if Postmodernism itself is a vacuum.
Addressing the question “So what ever happened to Postmodernism,” in 2012, critic and curator Kim Levin, writing for ArtNews, framed Postmodernism as having lost its depth and offered her own nominee for the next dominant “ism.”

In the past couple of years, there’s been a new post-Postmodern movement lurking in Europe: Metamodernism. It features an agenda that involves art that is impermanent, incremental, provisional, and idiosyncratic, as well as site-specific and performative, emotive and perceptual, devious and questioning.

OK, Metamodernism sounds intriguing, but is just one of many competing approaches that seem to be jostling for attention: it’s an atomized internet-fueled world out there, up for grabs, highly unstable and filled with competing and conflicting circles and individuals. “What’s next?”—if there is a next— is a very complicated question.
Discussing the that very question on my Facebook page, Alan Bamberger, the San Francisco-based proprietor of ArtBusiness.com, commented on some of the tendencies he is noting:

The “blinders effect” of traditional art school educations is coming to an end, assuming it hasn’t ended already. The types of art artists make as well as how they get it out in front of the public are evolving before our eyes. Artists are increasingly realizing that they can make their own way and not be held back by traditional protocols, standards or requirements.

Another of my Facebook friends, critic Shana Nys Dambrot, thinks that the internet is playing a central and positive role in art’s current evolutions:

The simultaneous manifestation of everything ever all at once represented by the Internet has also become the zeitgeist of the real world now. There are no more isms, only hashtags. I kind of like it.

Artist and writer Carol Diehl, taking a different tack, isn’t biding her time waiting for the end of Postmodernism: it is the commercialization of art that wears her out. Carol says she simply  “Can’t wait for Post-Commercialism.” It’s a great point, as the commercialization of art is a kind of inescapable force that seems to warp all forms of art, across the board.
Speaking of commercialism, I recently took my family on an Alaska cruise, and discovered just how truly awful cruise ship art is. On board the ship there was a rotating gallery that featured Thomas Kinkade giclée prints, bad Cubist palette-knife knockoffs, Fisherman’s Wharf Surrealism and other dreck. Passengers were invited to fast-paced art auctions—where drinks were served—and “talks” that were hardcore sales pitches. 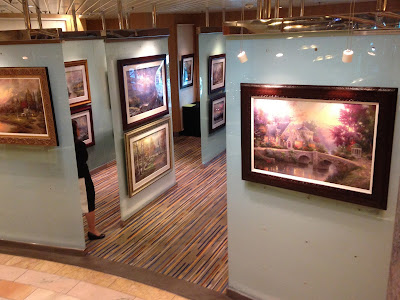 Kinkade prints on view in the cruise ship gallery

And why, you are likely wondering, am I suddenly talking about cruise ship art in a blog about the issues surrounding Postmodernism? The answer is that Postmodern art and Thomas Kinkade strike me personally as having something in common: both seem so “over,” and yet they linger. The truth is that both academic Postmodernism and cruise ship art remain popular with their divergent audiences.
I can complain all I want but Postmodernism—including the rigorously academic variety that requires absurd labels to explain itself—is still the dominant mode in most academies and institutions. Postmodernism’s tacky, hyper-commercial opposite—cruise ship art—a form of mass art that requires only a few martinis to appreciate, seems firmly entrenched as well.
In between these two extremes a lot of wonderful art is being made. The artists who are making it don’t care about the market and they don’t care about isms. My guess is that the best things are always going to be found where deadly dull labels and dry martinis aren’t necessary.