‘British Invasion’ at The Museum of Art and History, Lancaster 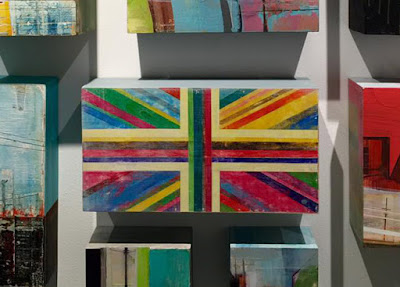 Artist David Hockney is both the guiding spirit and social connector behind a smartly engaging exhibition, British Invasion, now on view at MOAH: The Lancaster Museum of Art and History. Featuring the works of 25 British-born artists, the exhibition feels like the work of a cross-cultural autonomous collective. What the artists have in common is simply that they all came to California, perhaps for reasons similar to David Hockney’s. “I was drawn towards California, which I didn’t know,” Hockney once told an interviewer, “because I sensed the place would excite me. No doubt it had a lot to do with sex.”
Speaking of sex, America’s embrace of the original British Invasion of the mid-1960s had quite a bit to do with that as well...
The British Invasion, a cultural phenomenon that brought British rock across the Atlantic to a generation of music-hungry American teenagers, came to a climax on February 9th, 1964. That evening at 8PM an estimated 73 million Americans gathered in front of their mostly black and white TV sets to watch The Beatlesperform five songs. The group’s sheer magnetism—a blend of Continental sex appeal, youthful insouciance and lyric musicality—was potent enough to make America’s patriarchs nervous. The job Elvis had started by shaking his hips—of teaching American teenagers how to shake loose another layer of Puritanical reserve—was being finished by British musicians.
“A lot of people’s fathers had wanted to turn us off,” Paul Mc Cartney later wrote of the Sullivan performance: “They told their kids, ‘Don’t be fooled, they’re wearing wigs.’” Despite their father’s warnings, young Americans went bonkers over The Beatles—soon followed by The Rolling Stones, Herman’s Hermits, The Animals and The Who—were the vanguard of a host of “London Swingers” that helped integrate countercultural lifestyles and points of view into the American mainstream. Most Americans were understandably grateful.
The sense of affection has endured—perhaps even grown stronger—over the past five decades. When Pappy and Harriet’s Pioneertown Palace, a popular Mojave Desert roadhouse, announced last month on Twitter that Paul McCartney (now 74) would be making an appearance, nearly 1,000 people promptly lined up on the dusty desert road hoping to score a $50.00 ticket. Many ended up listening outside, while a lucky group of 300 that included artist David Hockney, squeezed inside to hear McCartney rock his way through a 19 song set and a triple encore.


It’s poignant to think of Hockney and McCartney, two prime movers of British-American popular culture, sharing a few hours together at a bar in the California desert, such long way—both literally and metaphorically—from the verdant countryside once painted by John Constable. Perhaps this sense of exoticism and distance is the reason why Hockney (and other British artists and cultural figures) have taken such an interest in the Antelope Valley and other California desert regions.


The Mojave desert held a special appeal for the author Christopher Isherwood, a pioneering British expat. He liked its “weird vegetation and immense vistas“ and wrote admiringly of “...this untamed, undomesticated, aloof, prehistoric landscape which relentlessly reminds the traveller of his human condition and the circumstances of his tenure upon the earth.” And it was Isherwood who served as a friend and mentor to David Hockney after his arrival in Los Angeles in January of 1964—just a month before The Beatles performed on The Ed Sullivan Show—telling him: “Oh David, we’ve so much in common; we love California, we love American boys, and we’re both from the north of England.”

As soon as Hockney set up a studio in Los Angeles—where he has lived on and off since his arrival—he became a “must visit” art world connector for Brits and others. His set of video stills, 112 L.A. Visitors records those who stopped by in one period between 1990 and 1991. Some of those portrayed stayed in California and became part of the ongoing cultural hybridization that the MOAH’s exhibition documents.

Getting back to the MOAH’s exhibition and taking it in, it can be challenging to decide precisely what remains “British” in the works of these expats and semi-expats. Many have definitely morphed into Californians, perhaps because some seem to have absorbed a dose of American “forwardness” that has eroded the culturally imposed reserve they might display at home. Still, despite having traded duck ponds for swimming pools and wool sweaters for brightly-hued bathing suits, the artists in this exhibition have retained an admirable depth of cultural sophistication.
Characterizing the artists whose works are on view at MOAH—in general terms—as being both principled and eccentric seems about right. They tend towards being informed, witty and a bit jaundiced, just as you might expect. British Invasion is a large show, filling two floors and 20,000 square feet, but hopefully a sampling of a few notable works will help bring home that point.

David Eddington, who lives and paints in Venice and who has been in the U.S. since 2000, is a recovering realist who is showing a cycle of four large acrylic paintings on the theme of the four seasons. Alternating between very specific representational elements—for example, the skulls and bones of his “Summer”—and the more stylized, spontaneously brushed imagery of his settings, Eddington seems quite comfortable letting his rational and intuitive inclinations collide with each other. The calligraphic, stained acrylic brushstrokes of his “Winter” could have been made by Helen Frankenthaler, but the stark human pelvis that stands in the foreground transforms the scene into an idiosyncratic “vanitas.”

Max Presneill, a London-born artist who is the Director/Curator of the Torrance Art Museum, is represented by three abstract paintings that demonstrate the conceptual underpinnings of his work. His working methods—which involve removing, covering and negating—result in a matrix of seemingly casual marks, stains and strokes that evidence the artist’s activist thought processes. Presneill’s canvases embody a paradox: they simultaneously move towards meaning while remaining insistently abstract. To be too specific, they seem to suggest, would be to moralize (or appear authoritative) and that is to be studiously avoided.

There is perhaps a similar reticence in the painting/collages of Trevor Norris, which bring together linear abstraction with snippets of text taken from the artist’s written recollections of childhood memories. It’s as if Norris wants to tell us about himself, but not over-burden us: he has retained his proper British manners.


Kate Savage—born in Sussex, England, and raised between the Hudson Valley and Greenwich Village, New York by two visual artists—is represented by a portrait and related headdress from her Ageless series. Interested in “cultural extensions and their symbolic baggage” Savage’s works have their deep roots in the British sense of class distinction which she has brought forward to morph into a more contemporary set of concerns with female identity and personal psychology.
Strikingly similar concerns—the re-framing of artifacts relating to women’s experience in past culture—animate the “metaphysical surgery” depicted in Sarah Danay’s Tourniquet. Danay’s work manages to be, among other things, grim, poignant and graceful.

Jon Measures—an artist, graphic designer, illustrator and educator—has provided British Invasion with a tour de force: It Is What It Is. An assemblage of forward-thrusting collage paintings that are vitalized by a distinctive graphic energy, It Is What It Is combines digitally edited photos layered and tweaked into collages of life in Los Angeles: Measures describes his process as “ a hybrid between painting, photography, digital art and collage.” There is considerable ambivalence in Measure’s view of his adopted home town and its unsustainable modes of life.