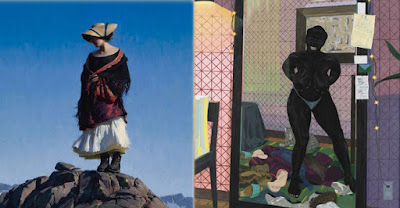 Above: Details from paintings by Jeremy Lipking (L) and Kerry James Marshall (R)
Yesterday I had the opportunity to visit two superb exhibitions of figurative painting: Jeremy Lipking ‘Recent Paintings’ at Arcadia Contemporary and Kerry James Marshall ‘Mastry’ at MOCA. Born twenty years apart—Lipking in 1975 and Marshall in 1955—and raised twenty miles apart —Lipking in Santa Monica and Marshall in Watts—both artists are concerned with painting the human figure, but their social contexts and artistic intentions are strikingly and tellingly divergent.

Jeremy Lipking is a Classical Realist whose ability to effortlessly intersperse convincing evocations of form and energetic, improvisational brushwork have earned him a considerable following and reputation. The Art Renewal Center—which advocates “a return of training, standards and excellence in the visual arts”—has honored Lipking with the designation of  ARC Living Master™. Lipking has also been the recipient of other honors including a 2014 Prix de West Purchase Award. One of the most impressive and fully-realized canvases on view in the Arcadia show depicts Lipking’s pregnant wife Danielle in profile, draped in a translucent, striped dressing gown. It’s a painted love letter from a virtuoso artist to his wife and unborn child. It’s also a painting that indicates Lipking’s ambition, which is to take his place in the long line of “Masters” who have used oil paint—a frustrating, flexible and sensuous medium—to capture and immortalize human dignity and affection.

The idea of joining the continuum of Art History has also been a lifelong goal for Kerry James Marshall, who has dedicated his career to addressing the omission of black figures in the Western tradition. “He knew he wanted to be an artist very early in his life,” recalls his friend Luis Serrano, “ If I remember correctly he took a field trip to the museum in elementary school and he told himself he wanted to create works of art and to be collected.”

A dedicated student who pored over paintings in museums and books, Marshall was motivated by the gap between what the Old Masters had been able to do in their art and what he wanted to do in his. His ambition and racial consciousness helped Marshall to come to a pragmatic realization: that “Mastery” is a way of achieving freedom and entering the world (and history) on your own terms. “You have to recover the capacity to imagine yourself as an ideal” Marshall says, “and figure out how to project that into the world.”

Marshall’s project, which involved idealizing and re-positioning the identity of his race and community, has used the color black as both a formal device and a metaphor. All of Marshall’s figures are black—racially and chromatically—which has the effect of making black function in a new and symbolic way. Black never appears in the surroundings of Marshall’s figures, but it is serves emphatically as their skin tone and marker of their beauty.
As MOCA’s website offers: “By mastering the art of representational and figurative painting during a period when neither was in vogue, Marshall produced a body of work that bestows beauty and dignity where it had long been denied.” His four pictures of Boy and Girl Scouts—which have the solemnity of icons—manage to both elevate their subjects while also multiplying the web of social complexities that envelop them: is that a blast or a halo surrounding the Boy Scout’s head?

While viewing Marshall’s retrospective (which was organized by the Metropolitan Museum of Art) the social presence and obvious pride and interest on the part of African Americans visiting the show was moving and profound. Marshall’s paintings do for people of color what the Romantic works in the Louvre’s Salle Mollien did for the citizens of Post-Revolutionary France, which is to validate and ennoble their passions and struggles.

It must be extraordinary for Marshall to step back and reflect on both his success in making museum-worthy art and in having used his imagination as a tool for cultural transformation: Marshall’s level of commitment and social consciousness deserves tremendous respect. Numerous and honors—including a 1997 McArthur Award—have cemented his achievement and brought Marshall’s work into the pantheon he once admired as an outsider.
In the process of entering the canon, Marshall has clearly studied and absorbed ideas and motifs from a wide range of influences including Renaissance art (Giotto is a favorite), Haitian and African art, folk art and also from the works of recent artists including Warhol—in Marshall’s use of stamps and collage elements—and Basquiat whose ability to scatter cultural references throughout a single image likely inspired the overlaid elements and drips of Marshall’s The Land That Time Forgot.

One charming reference that I noticed at MOCA was Marshall’s re-appropriation of the anamorphic skull in Holbein’s 1533 painting The Ambassadors: it is transformed in Marshall’s 2012 allegory School of Beauty, School of Culture into a kind of flattened and skewed Disney princess, perhaps the only white-skinned face to appear in any of the artist’s paintings. It’s a painting about the intersection and celebration of black beauty and culture, and the anamorphic image of white cartoon glamour serves as a kind of cultural Memento mori; a weird apparition that two small children inspect with a mixture of curiosity and caution.

The Mirror Girl’s bedroom is a long, long way from the Eastern Sierras, which brings me to the inevitable question: what was it like to see Jeremy Lipking’s work and Kerry James Marshall’s work on the same day? The honest answer... it was thrilling.

One of the things that art is meant to do is to transport you, to get you outside of yourself, and both shows did that for me. Lipking did it with his fluency and introspection, Marshall with his incisiveness, complexity and deep commitment to making social statements.
At the end of the day, Looking over Marshall’s Silence is Golden I realized that although I had seen nearly 100 paintings in a single day, I hadn’t seen a white male in any of them. That made me the white male, standing outside, just where Kerry James Marshall had once stood: in a museum, staring at a painting, wondering if art could possibly help the world be better.
JEREMY LIPKING
“Recent Paintings” - March 11 - April 2
Arcadia Contemporary
9428 Washington Blvd.
Culver City, CA 90232
KERRY JAMES MARSHALL
“Mastry” - March 12 - July 3
MOCA Grand AvenueTHE MORNING EMAIL
250 South Grand Avenue Los Angeles, CA 90012