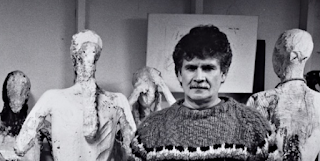 Manuel Neri, widely regarded as the foremost American figurative sculptor of the latter twentieth century, died peacefully at his home in Sacramento, California, on October 18, 2021, of natural causes. Neri’s highly evocative, lyrical work with the female form, chiefly in plaster, bronze, and marble, represents a vivid link between modernist sculpture and the fullness of the Western figural tradition.

Manuel John Neri was born April 12, 1930, in Sanger, California, the son of immigrants from Mexico. As a boy, he moved to Oakland with his mother and two sisters, following the death of his father, and he came of age in the San Francisco Bay Area during the 1950s and 1960s, a time of radical innovation on the West Coast, and in contemporary art generally. Neri's early studies were at San Francisco City College (1950); UC Berkeley (1951–52); and California College of Arts and Crafts (1951–56), where he began working with clay and natural materials, and became close friends with ceramic sculptor Peter Voulkos. After completing military service with the U.S. Army in Korea, he returned to the Bay Area and enrolled at the California School of Fine Arts under the G.I. Bill (1956–58).

At CSFA, Neri studied alongside Billy Al Bengston, Joan Brown, Jay DeFeo, Charles Ginnever, Wally Hedrick, Fred Martin, Henry Villierme, and others. During that period, he worked in the thick of the Beat scene in San Francisco; he was a member of the Six Gallary artist collective, and the gallery's director in October, 1955, when Allen Ginsberg presented his epic poem "Howl” at the legendary "Six Poets at Six Gallery" reading. Along with Brown, DeFeo, and Bruce Conner, Neri was also a founding member of the Rat Bastard Protective Association. As the only sculptor of the so-called "second generation" of the Bay Area Figurative movement, Neri became known for painting his sculptures, treating the figure as a kind of open, three-dimensional canvas.

Neri taught at San Francisco Art Institute (1959–65) and at University of California Berkeley (1963–64) before joining the art faculty at UC Davis in 1965, where his fellow professors included Robert Arneson, Roy de Forest, Wayne Thiebaud, and William T. Wiley. He retired from UC Davis in 1990. His teaching position at Davis enabled him to purchase a former Unitarian church in Benicia, in the North Bay, which would be his home and studio for the remainder of his career.

In a trajectory of some sixty years, Neri's work has merged contemporary sculptural concerns with both classical and modern forms. His use of figural naturalism is iconic and archetypal, but at the same time, Neri has consistently explored the visual and tactile, and the integration of color and form as expressive devices.

During the 1990s, Neri focused on the figure in relief, first in a series of small plaster maquettes, and then in an ambitious series of life-sized figural sculptures in plaster, bronze, and marble, in which figures seem to emerge from, or into, a flat wall, a spectacular revival of an ancient sculptural form that addresses modern ideas of appearance and disappearance, hiddenness and disclosure. Further, the relief extended his ideas regarding the use of the partial or fragmented form as a means of expressing complex emotional states in figures whose identities are otherwise buried by their fragmented condition. But all of Neri’s work has been concerned with capturing profoundly human psychological or spiritual attitudes through figural stance and gesture, and through the rich, textural surface inscriptions left in place by the artist. These elements in his sculpture were stimulated and encouraged by his forty-year professional relationship with the model Mary Julia Klimenko, a poet with whom he began working in 1972.

Through Klimenko, Neri also developed a deep love of poetry, and he eventually produced a number of collaborative artists' books, including three featuring poems by Klimenko along with Neri's original artworks: She Said (1990–91), with hand-colored etchings; Territory (1993), with lithographs and an original drawing, both published by Brighton Press; and Crossings/Chassé-croise (2002–03), printed by Editions Koch. In the mid-2000s, he also collaborated with master calligrapher Thomas Ingmire for a series of unique artists' books that combine Neri's original drawings with poems by Pablo Neruda, Federico García Lorca, and W. S. Merwin.

For the past seven years, Neri has lived in Sacramento with his caregiver, Maria Elisa Cantu. He is survived by his sisters Maria and Helen; children Raoul, La Ticia, Noel, Maxmilian, Ruby, Julia, and Gustavo; and seven grandchildren. Neri was predeceased by his parents, Manuel and Guadalupe Penilla Neri.

His death was announced by the Trustees of The Manuel Neri Trust. A memorial is planned for next spring at the Manetti Shrem Museum, UC Davis.

Regardless of pose, condition or construction, Neri’s figures are mute reminders of what it means to be human. He doesn’t pommel us with weighty existential messages; he suggests. The references to states of mind issue subtly from his view of human form. Intimations of timeless concerns, life’s brevity and mutability, mankind’s essential aloneness, these are there if you want to identify them. If not, an appreciation of Neri’s use of form, color and material is often enough.

The talent that Neri revealed in these rough formative works is for gesture – an acute eye for the way a body positions itself to evoke emotion…. He concentrated on gesture, as we commonly use the term to describe a movement or pose of the body, as well as its importance in Abstract Expressionist painting, where the term was used to describe the shape and emotional concentration of brushstrokes. It was Neri’s great insight to see that the two notions of gesture could be wedded in sculpture. This was his insight alone and explains why he was the only sculptor among the Bay Area figurative artists of his formative era.

It was exhilarating to see the progressions of Neri’s work complemented by examples of his sculpture that haven’t been seen on the East Coast since 2003, when Neri had his last of eleven solo shows at Charles Cowles’s eponymous SoHo gallery before it closed in 2009. With his gift for working in plaster and bronze and his talents as a draftsperson, Neri presents himself as a latter-day California version of Alberto Giacometti. Like the European modernist, the American sculptor stands slightly apart from the artists with whom he can be associated. Though his three-dimensional figures belong next to the drawings and canvases of his Bay Area colleagues, including Richard Diebenkorn, David Park, and Elmer Bischoff, Neri has receded further into the background. This exhibition marks a perceptive and corrective effort to historicize Neri’s tireless and astute oeuvre.

“Because the figure is very important to me, not just because it is traditional. I’ve always been very intrigued with the spirit that the figure conveys. Not necessarily in Christian terms, but in relation, for example, to the Greek heroes with their dirty feet and curious morals – they were heroes just the same. It is this God-spirit that I think is the real God for us. It is this thing inside of us that I want to talk about in the figure. I find it very hard to talk about those feelings, perhaps because I don’t even want to question them. I can deal with them only through the work.”